Last week we wrapped up a short project at the Compton School in Barnet, north London, just in time for International Women’s Day. Our group was smaller than usual, but super organised and very capable. Their final piece explored political representation, the pay gap, reproductive rights and period poverty.

Exposure has been producing these type of group projects (known as Exposure Asks) for several years, working with dozens of young people and covering anything from exam stress to modern slavery.

So what makes this format work so well?

The Exposure Asks format could be even better: with a few extra sessions than we normally have the budget for, young people could also take responsibility for the photo editing (learning to use Photoshop in the process) and uploading (learning WordPress). The less we facilitators/trainers do, the better it is not only for their skills development, but also for their sense of ownership over the project.

If you’d like to know more or to work with Exposure, do get in touch. 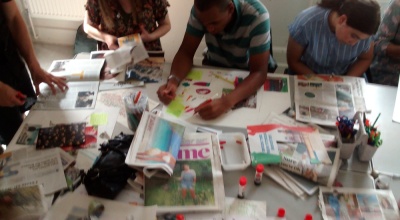