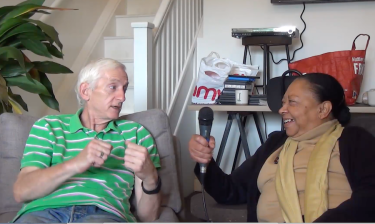 My reflections on leading a project for participatory video specialists InsightShare. This post originally appeared on InsightShare’s blog.

Pedicures for homeless guests. Creative writing or cooking courses. More quiet zones to relax in. These were some of the suggestions that emerged after we screened ‘The Place To Be’, a film made by guests at St. Cuthbert’s Day Centre.

St. Cuthbert’s, a drop-in centre for vulnerable people near Earl’s Court in west London, is already pretty special, according to its visitors. As one of them said: “The staff come and say ‘Good morning, how are you?’. You don’t always get that — in some centres, you just sit down and nobody wants to know.” Another said he walks a long way to St. Cuthbert’s every week, even though other places are more convenient: “People here accept me as I am… they never make you feel less important than others.”

That warm welcome has been extended to those in need for some 20 years, but recently St. Cuthbert’s saw big changes as part of the Refettorio Felix project. The drab church hall has been redesigned as a bright, modern, calming space. Instead of queuing up, visitors are now served lunch by volunteer waiters and waitresses, and are offered vegetarian or allergen-free options. Ingredients, sourced from surplus food gathered from around the city, are turned into nutritious three-course meals.

The new approach aims to rebuild dignity by “feeding body and soul”. And as the first of its kind in the UK (similar refettorios have been created in Italy and in Brazil) the team behind the transformation wanted to know if it was having the intended effect. Would the new environment make a difference? Are there things people don’t like? What’s missing?

That’s where InsightShare came in, to explore these questions through a short participatory video project.

Unlike having a filmmaker produce an impact film, using participatory video meant that:

In terms of facilitation, there were some limitations to work around:

With these restrictions, we had to be flexible in some ways. With limited time and conversations that tended to go off on a tangent, I focused our sessions on interviews (rather than building skills with other camera exercises). We decided to provide the core questions for the group (rather than spend time devising questions together). And I kept the editing session as simple as possible (going through a rough cut with the group, noting down requested changes, and then finalising it myself).

My task was also helped by:

Ultimately, we had 11 different people sharing their views, personal stories, concerns and suggestions in the film. More thoughts and ideas bubbled up in the discussion after the screening, and both Food For Soul and St. Cuthbert’s have promised to take those on board. It’ll be great to see how things evolve next.