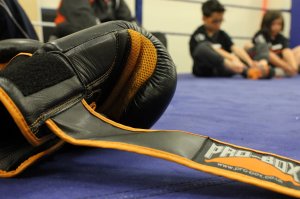 Just finished a first trailer for our short doc (watch it here). There are a few more stories and characters to be added to the mix. In the meantime, some things I’ve learned about boxing:

1. Interval training includes a spot of chess.  Seriously – sprints, to a quick session on the chessboard, to the skipping rope. Turns out it’s not so much about pummelling each other as careful tactics (and then pummelling).

2. It’s less dangerous than cheerleading, at least according to some claims, which find that there are more injuries caused by skiing, rugby – and yes, cheerleading than by boxing. Who says girls aren’t into high-risk sports??

3. Parents want their kids to get in the ring. Not all parents, clearly – but more and more are being won over. The British Medical Association still vehemently oppposes under-16s boxing (actually, it opposes all boxing) on medical grounds. But they’re starting to look a bit old-fashioned. Just ask Lucy, aged 9 (she’s the one in our trailer whose “favourite one is Harry”).