Maybe I’m too early. There are flatscreen TVs, fashionably ripped jeans and perfume brands I’ve never heard of – but not much selling going on. Security guards lean over the stairwell. Traders count their stock. The four-storey Tianxiu building, in central Guangzhou in southern China, comes alive later perhaps.

I won’t know for sure, though, not today. It’s three in the afternoon, and I have just a few hours in the city. I’ve made a beeline for Tianxiu: Guangzhou is home to the largest African community in the country, and this is the heart of it all. 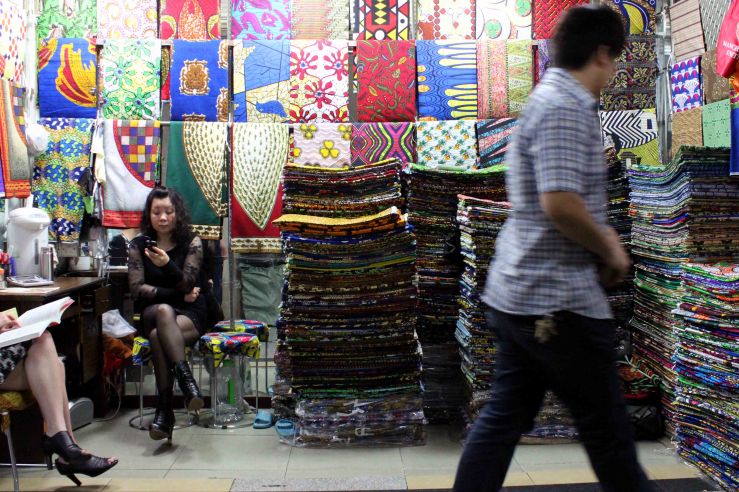 It’s not the most obvious tourist destination.  The security guards look on, bemused, when I take photos. Stallholders eye me with suspicion; or when they realise I’m not buying, ignore me.

I’m still not sure why I took a 24-hour train to get here. Maybe, travelling through a land impenetrable in language and culture, I needed to be among by people feeling as lost as I did. Maybe because – after a year living in Tanzania – I believed I shared something with Africans. At least, I suspected they’d be curious enough to talk to a lone white girl.

Officially, there are some 20,000 Africans in Guangzhou. Add the uncounted, those illegally and temporarily resident, and the figure is estimated at 150-200,000. The media might overstate the presence of a community – that is after all largely transient still – in its catchy nametags: Chocolate City, Little Africa. Yet some figures suggest the African population is growing by 30-40% each year.

Either way, businesspeople are only too happy to tap into the little African markets on their doorstep. On Tianxiu’s second floor, a Chinese man who introduces himself as Billy sells fabrics to buyers from East and West Africa. Samples with gaudy patterns are displayed across every wall; piles of plastic-wrapped goods fill the floor space. I think of the pieces I bought on my own travels. Authenticity is cheap, in the end, and spun in mass copies, thousands of miles away.

Round the corner is the ‘Nanini Forward Freight’ office. A noticeboard lists prices for shipping to Abidjan, Libreville, Tripoli, Cape Town, Maputo.  I tell the Chinese girl at the computer I’m just looking, but she smiles, invites me in. She must be in her early twenties, but – dressed in a patterned skirt, leggings and trainers – she looks younger.

Her English name is Blue. She chose it, she says, “because the sky in our hometown is always clear and blue!”. She giggles, then seems embarrassed: “Just kidding”.

Blue’s English is better than almost any other Chinese I’ve met in the past weeks. Good enough, in any case, to express the eternal dilemma of the migrant – her hometown, on Hainan Island, is 12 hours away by train. “I get homesick. But our life there is limited. Everybody wants to work in a big city.”

Africans may be coming, but China’s real migration story is the one within its borders. Strict segregation of the nation’s rural and urban population, and greater privileges to those registered as urban residents, has prompted droves of farmers and peasants to seek better lives in cities. Today, some 160 million people are classed as migrant workers, the largest wave of migration in human history.

Typically, migrants are poorly educated; Blue, however, graduated last year, and got this first job easily. “You just need to speak English, be able to write a little, and to communicate with customers.” She plans to get experience here, then move on. “We have to find something we’re really good at and then utilise it!” She giggles again.

A customer arrives – a Gabonese man – and Blue’s colleague tries to help. But they get stuck: the colleague speaks no English. The customer gets impatient, raises his voice, until Blue steps in. She smiles, looks him in the eye, appeals to him on his terms: “Brother! We can reduce price…” Voices soften again. She’s already utilising her strengths. The Gabonese brother allows a grin at last: it’s back to doing business as a thrill, not a headache.

Upstairs, a Kenyan is rifling through pairs of jeans. An efficient-looking, short-haired Chinese lady holds up pairs for him, but he shakes his head: too small.

“My wife is three times your size,” he says, and the Chinese lady looks rather horrified.  He’s buying presents now, but he comes to Guangzhou, he says, every few months to buy spare parts for motorcycles and cars.

“When I married her she was small like you,” announces the Kenyan. He shakes his head. “I’m looking for a smaller one.”

On the ground floor is Moka Coffee, windowless and functional. The woman at the next table, perhaps in her early fifties, is tall, with meticulously manicured nails and a pink smartphone. There’s a pocket-sized Chinese dictionary on the table. She tells me she’s Kenyan, but married and living in Tanzania. There it is already, the Tanzanian connection. And there’s the instant warmth, based on a language and a place in common. I ask what she does here, but her answer is vague, so I don’t insist.

Three other Kenyans arrive: Evans, bushy-haired and soft-spoken, perhaps in his early forties; Mussa, younger and louder; and another friend, short and smartly-dressed in suit. Mussa and Evans have been in China since 2005. Evans worked until last year as an IT teacher in the provinces. He prefers his life in Guangzhou: more varied food, more opportunities to do business –“until 2 am”, he assures me. But also, as a partner in the business he now runs with Mussa, easier legal procedures: he has less trouble now renewing his yearly residence permit than as a teacher.

After eight years here, though, Evans still feels an outsider. He has no Chinese friends. “It’s not very easy for them to let you in… To be accepted in society you have to have a lot of cash, otherwise you are always the foreigner.”

Nor does he have great impressions of the Chinese as businessmen. “If you show them where you’re taking your goods they will catch you. So I send goods to my company office in Dubai or Kenya, not to my client… They are selfish. You can’t do a good deal where both of you benefit. They sideline you.”

That impression seems to apply on the macro scale too. Chinese imports from Africa jumped 20-fold in a decade to reach $113-billion in 2012; even before that, the Asian giant had become Africa’s largest trading partner. African governments – and citizens – don’t always see this as positive.

It’s a complicated relationship. In Tanzania, the Chinese were criticised for taking people’s jobs, and by setting up shop in Dar es Salaam marketplaces, for taking their customers. Their products were known to be poor quality – but they were also affordable. The Chinese funded and completed large-scale construction projects – but they also reneged on promises. The land cleared in 2010 for a new airport terminal, for instance, part of a Tanzanian-Chinese government deal, has remained empty.

Is China always the bad guy, though? Mussa and Evans’ smartly-dressed friend doesn’t think so. “It’s our leadership. They’re the ones negotiating very bad deals, that benefit only themselves, not their country!”

I leave the Kenyans lingering over coffee to rush back to my hotel – too little time in Little Africa. Maybe already, as I leave, Evans is driving a hard bargain; maybe Blue just won over a new customer. Maybe Tianxiu is buzzing now with buyers and traders and lost souls far from home, searching for something.